TLDR; This post serves as support for a C++ to Python binding demonstrator that can be found on the corresponding open-source git repository. A connection between the two programming languages combines the data science & development productivity of python with the remarkable performance of C++. The implementation includes a clean and flexible binding setup, and also compares the difference in execution time.

When it comes down to making a choice between Python and C++, often the type of software you are developing is the deciding factor. Take for example the interpreted language Python: The ideal choice for data analysis or research in a machine learning context. On the other hand, a compiled language such as C++ is well suited for embedded development because of its performance, speed- and resources-wise.

But what if you find yourself in a situation that requires the benefits of both? In this case, it could be promising to establish a direct link between the two programming languages. Python, C++ … Let’s talk! 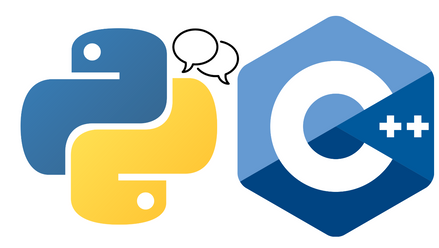 The right tool for the job

In an environment where complex optimization algorithms are being developed for edge computing platforms with limited resources, choosing the right tech stack is just crucial.

On one side, we want an efficient coding environment with short development cycles and fast evaluation & visualization of performance. Python seems to be an appropriate choice here. But on the other hand we’ll only have access to a limited amount of CPU and memory. Execution speed and resource management will be of key importance and here C++ steps up again.

There are definitely other alternatives to achieve the same goal. Consider the interpreted MATLAB (Simulink), which provides several toolboxes for lightning-fast development and can also export the code to C++ to a specific target device using the Embedded Coder. Therefore, the correct tech choice will definitely also depend on many other factors, very specific to each product. Maybe the optimal solution is a combination of both?

Let’s start by presenting the difference in execution speed. We are testing a dummy "counting_stars" function that contains a simple for loop. The performance is compared in 'main.py'. Here, counting_stars_python is a complete python implementation while counting_stars_cpp runs with a C++ backend and the established binding to Python.

Note that both functions have a completely identical python signature. When running the comparison (e.g. in docker using "docker compose build binding" followed by "docker compose up binding") We can see that, for this example, the function is a factor 33 times faster with the binding! 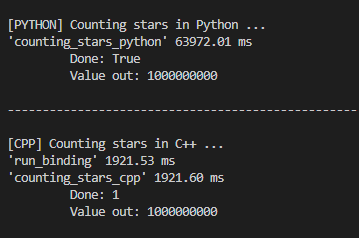 Note that although the binding interface is very strictly defined in binding_interfaces.h the actual interface is just a JSON string because of the binding_export wrapper. Implementation in this way is flexible towards different interfaces. Additionally, when interfaces would change during development, it doesn’t affect the binding that much.

During compilation (preprocessing, compilation & assembly), machine code is generated in the form of object files. These object files contain the compiled code (in binary form) of all available symbols. It is then up to the linker to connect the missing symbols across the different object files. The linker is what produces the final compilation output which can be either a shared object (which is similar to a DLL: dynamic load library) or an executable.

Without diving deeper into this. (You'll probably find a much more comprehensive and better explanation online) Here is the docker implementation using the GCC compiler with the output being an executable and a shared object respectively:

Note that the executable is only used for debugging & development, while the shared object is loaded in python to complete the binding.

Finally, run_binding.py uses python ctypes to load the DLL. because the actual interface of the binding is a JSON string, only the string and string length of input and output needs to be defined here. For this reason, the binding doesn’t have to be adapted for a changing interface.

For completeness, two unit tests are provided. The first one is testing the operation of the C++ binding given known input and output. The second one verifies the similarity between Python and C++ implementations. The result of the unit tests, with an associated code coverage report is given below. 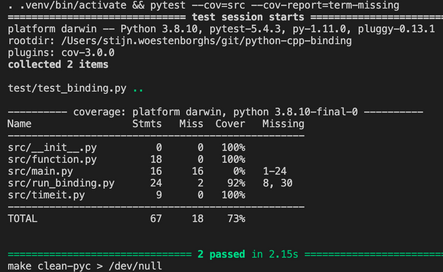 Note that compiler optimizations were not turned on during compilation. The reason is that in our dummy example, the compiler removes the for loop when we compile for execution speed (-O3 see table below). In this case, it takes the binding only a couple of microseconds to run. However, this does make the performance comparison basically invalid. 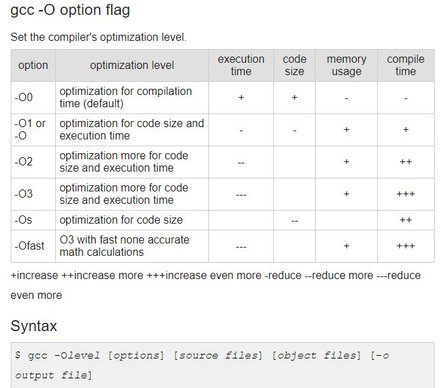